Bali is an Indonesian province and Island East of Java and West of Lombok. It is the westernmost of the Lesser Sunda Islands. The island is 5561 km² and has 3.216.881 inhabitants (2002). Almost 90% belongs to the indigenous population, the Balinese, who largely speak Indonesian and Balinese Hindus are or. The capital is Denpasar. Until 1958 was the capital of Singaraja.

Traditionally, there were several independent principalities in Bali. Entered for the first time in 1597 Dutch (the brothers Cornelis and Frederick de Houtman) the island, but only from the middle of the 19th century the island gradually under Dutch administration. The final, bloody submission took place in 1906, after the Balinese nobility in Badung (men, women and children) massively Perang Poepoetan (suicide) committed by armed only with kris and fire on the enemy to klewang.

Before the second world war settled a number of European painters on the island, including Walter Spies. They were inspired by the Balinese art, but art underwent in turn Western influences, particularly in the wood carving and painting. The Belgian artist Le Mayeur is an example of this. In Sanur is a museum tour in which to view many of his works are.

Bali is part of the Republic of Indonesia since the inception of that Republic in 1945. Bali is the 27th province (pro (p/v) insi). It is the largest tourist attraction of the country.

Language
The official language is Indonesian and English is the language where most Balinese can do for you. The unit of currency is the Rupiah. Money exchange rate changes daily.

Climate
Tropical climate. The average annual temperature is 26 ° c at sea level and an average of maximum temperature of 32 ° c in March. The rocks around the 29 ° C in July. In the mountains the air is less humid and a few degrees cooler. 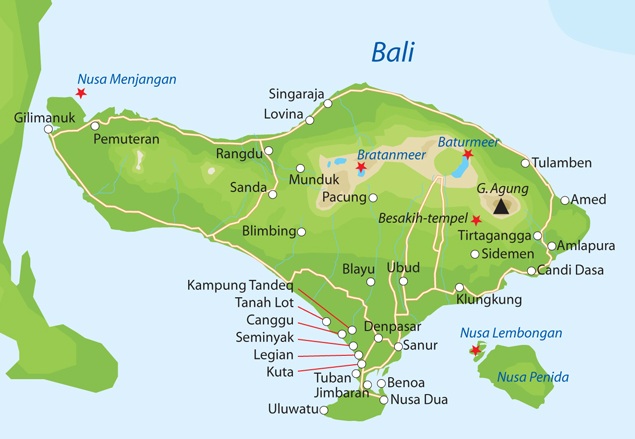